Story of the Rocks – Approach

Approach: patriarchy and women space to operate
Negotiation instead of equality

Zimbabwe, 2014
Stillare found a way that brings both men and women to a next stage of coping with each other. It is not about equality… it is not about women rights…. So about what is it? Is it about using the reduction of women to only become trade items? We don’t think so. We think we found a way to get modern patriarchy become more healthy again.

Women leadership: improving the instrument
In the summer of 2014, Professor Mirjam van Reisen of Tilburg University asked Stillare if it could provide input for the Second International Colloquium on Women’s Empowerment, Leadership, Development, Peace and Security by addressing an urgent call from the Association of Women’s Clubs (AWC) in Zimbabwe. The AWC was longing to find ways to improve protection and security for women and girls in Zimbabwean society.

The challenge was to find action frameworks on such a wicked problem. How to influence the Zimbabwean way of patriarchy without interfering the culture, giving the men reasons to control gender based violence and stimulating them to correct their peers. Our solution in this particular case was trade: zero tolerance to violence for skills, insight and collaboration.

Dr. Primrose Nakazibwe from Uganda’s Makerere University and Agnes Dinkelman, founder of Stillare, worked with a large group of women from all over Zimbabwe. For the end of the programme, there was a scheduled visit to Seke where we were invited to talk to the men of the village about community security and peace.

How to influence the Zimbabwean way of patriarchy without interfering the culture, giving the men reasons to control gender based violence. Our solution in this particular case was trade: zero tolerance to violence for skills, insight and collaboration.

Our start: Researching Zimbabwean rural situation
During the first days, we explored with the AWC women group the history of the communities, the social dynamics in the villages, the axioms that were shaping their reality and the perception women had on their own skills, insights and power when it came to their social and economic values. Women who are aware of their role and value are able to shape their world and search for opportunities to improve their situation.

In general, we came to the following insights:

When women are aware of their value, a new inner process becomes exposed. They will understand that they themselves have a space to operate. The next issue is how to use this newly found space.

Space to operate
The space to operate is different for every woman. Social, cultural, economic, religious and personal aspects will give women more or less space to achieve their goals. Using the space that is available and find ways to enlarge it does in fact improve personal and communal situations in many respects.

In the dynamics between men and women, the concept of “value” is key. When women consider themselves not as valuable, most men do not respect them. When men don’t think of women to be valuable persons violence is often the result.

In the Zimbabwean women’s groups, we explored the way women could use their space to operate. Women are able to improve their own lives and the lives of their community when they can use and develop their skills and insights and the collaboration with men who want to support the decrease of violence.

In communities where women do not value their own existence enough, the situation of dominance by men is likely to grow. Through the years, male dominance in Zimbabwe has developed in a hostile manner, with no connection to women, and with an increase in violence and sexual abuse.

By negotiating women can bring the men of their community to some level of reflection. During this process often a connection starts to form between them. This connection sometimes is full of micro-power-politics but it makes both sides understand that there is a interdependency. When they collaborate, they have an opportunity to use each other for profit (micro-power-politics) or explore new possibilities and warm connections (respect). When men and women collaborate on their goals and help each other to achieve economic growth and organisational goals, the community improves and violence will decrease further.

Reducing women to only become trade items?
The ‘Story of the rocks’ found solutions to decrease violence in Zimbabwean communities is not the way a lot of NGO’s want to work. They seek equality between men and women. Stillare chooses to work with the dynamics that brings both men and women to a next stage of coping with each other. We cannot ask men (and women ) to make a big step towards equality. To go there, men and women need a process of learning, experiencing and micro-power-politics within marriages, education and communities. Stillare wants impact, so we work with the laws of social dynamics.

Negotiation
As mothers and wives, women are no strangers to giving, caring and sacrificing. In the Zimbabwean group, we worked on strategic preparations of negotiations in stating that women want to do more than just be a mother or wife. In their role of mother and wife, they will of course remain caring and giving. By being aware of a space to operate, women started to understand that they have something extra to offer to the community that is important and of value. Considering the communal space, as a space that is ruled by men, women need to negotiate: what could improve our community and; how can men and women work together? Key question: What can I offer and what do I want in return? 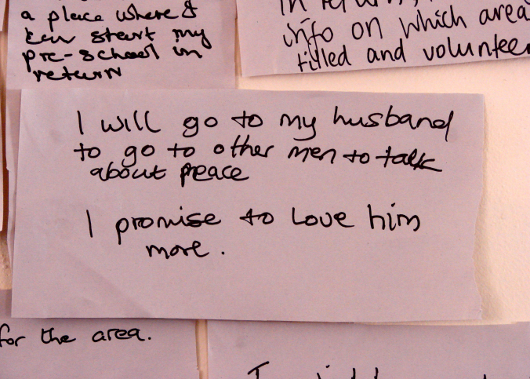 Shifting identity to real men
When women underestimate their value and men do not keep the balance between caring and asking (often demanding their families to satisfy his needs), men can become self-centred, hostile or violent. To create a secure and protective community, the concept of balance is important. Both men and women need to take their place in developing the community. The men who did not keep the balance between caring and asking have to shift in their identity. From self-centred, hostile and violent to becoming a “real man”.

In the Zimbabwean group, we identified within the group what in fact a “real man” is. The women thought a real man is one who is not violent or addictive, takes his share to build up the community and is responsible, protective and caring towards his wife and children. These were the topics women mentioned as we asked them to describe a real man. Negotiating with men on their space to operate, women want men to offer these for their assistance, skills and insights.

The men who did not keep the balance between caring and asking have to shift in their identity. From self-centred, hostile and violent to becoming a “real man”.

Men correcting men
It is important that men correct other men. Those who don’t want to adapt to a new collaboration with women need to be picked by other men to understand that their behaviour is not accepted anymore.

When women ask men to change their behaviour, the men do not respond. When men correct other men, situations are more likely to change. Men can position the norm and can work with issues such as honour and pride, for instance in situations in which men are violent towards women, their peers can consider them dishonourable in their actions.

This unity between men on this subject is important. A moral shift could start this way. Not by declaring violence as wrong but by declaring that without violence the profit for the community will be impressively higher. 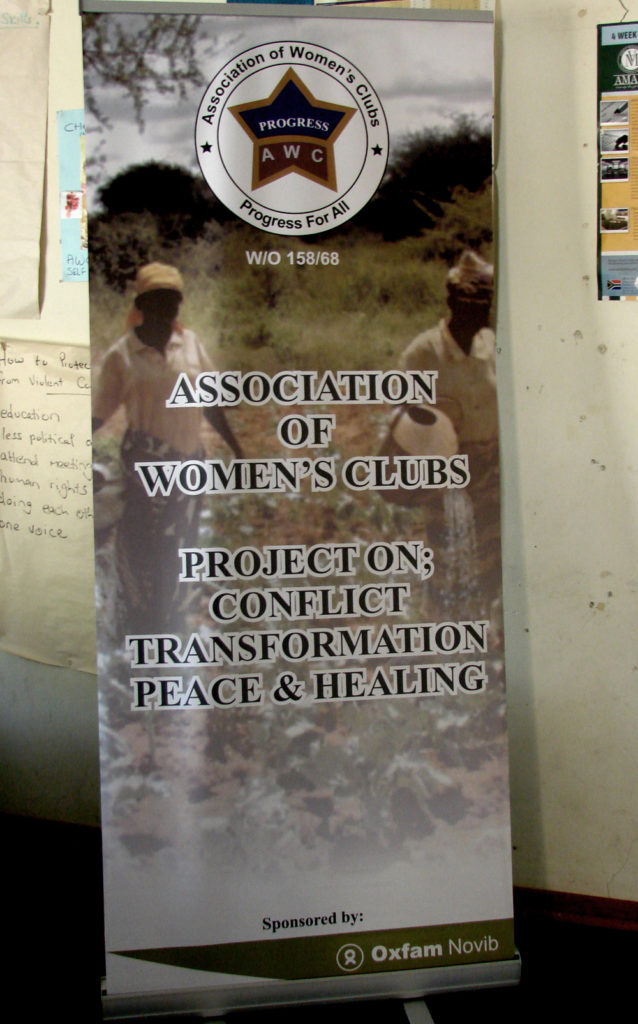 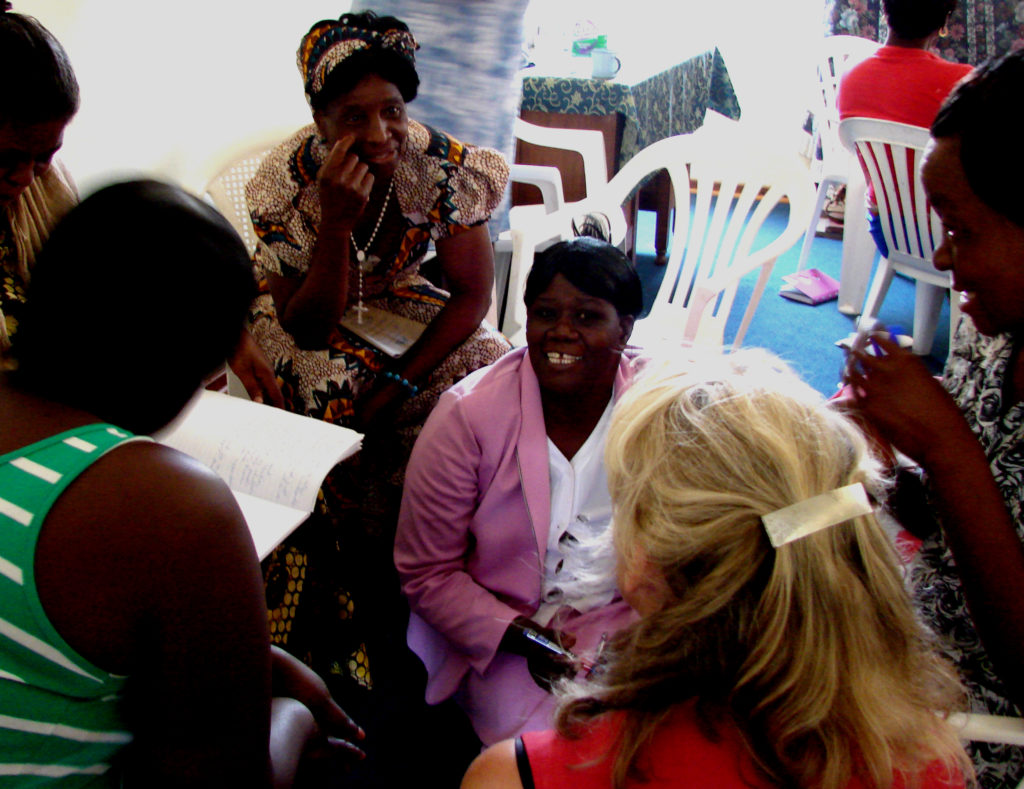 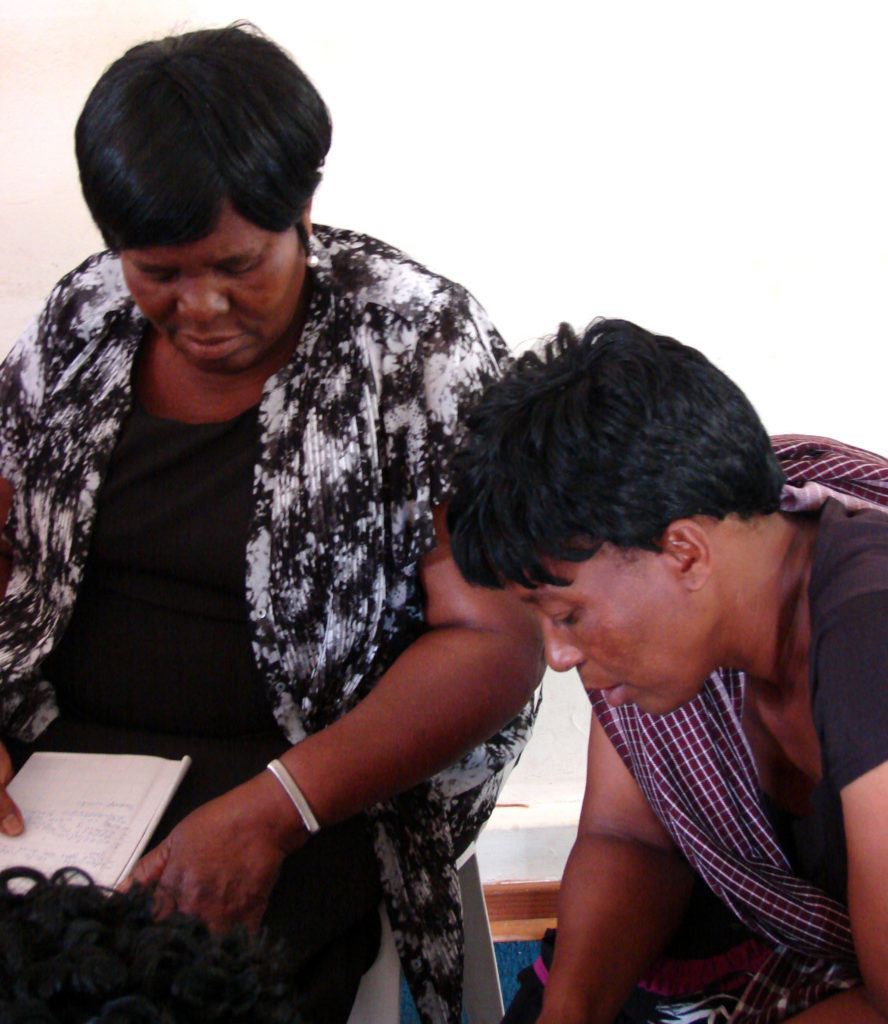 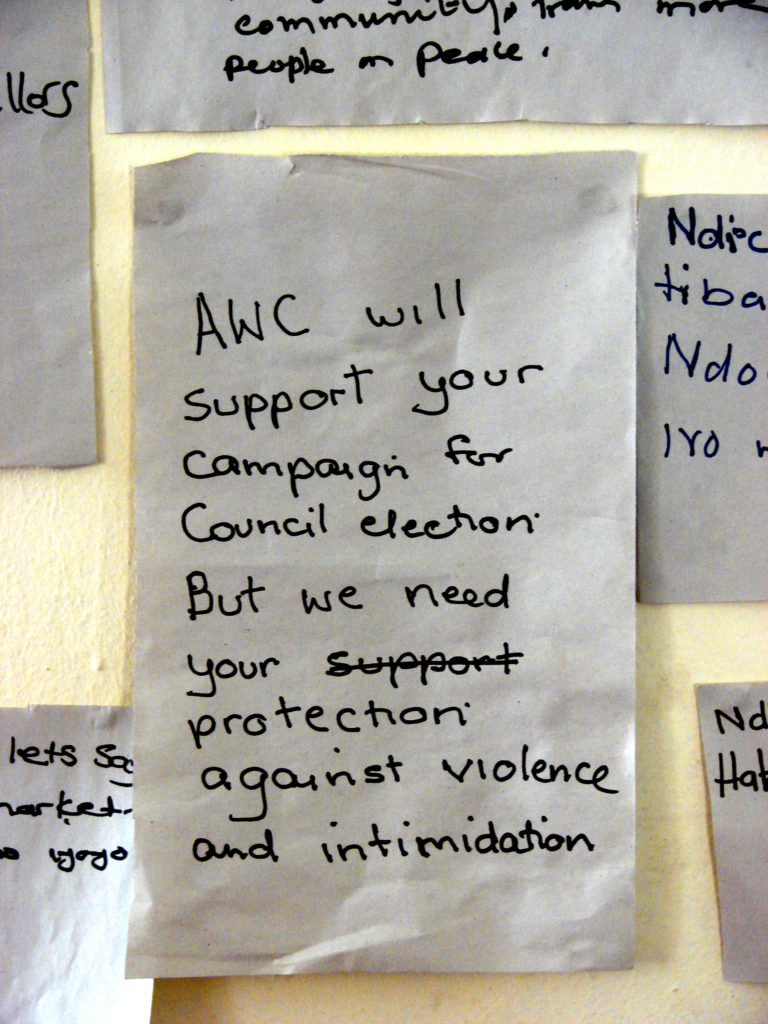 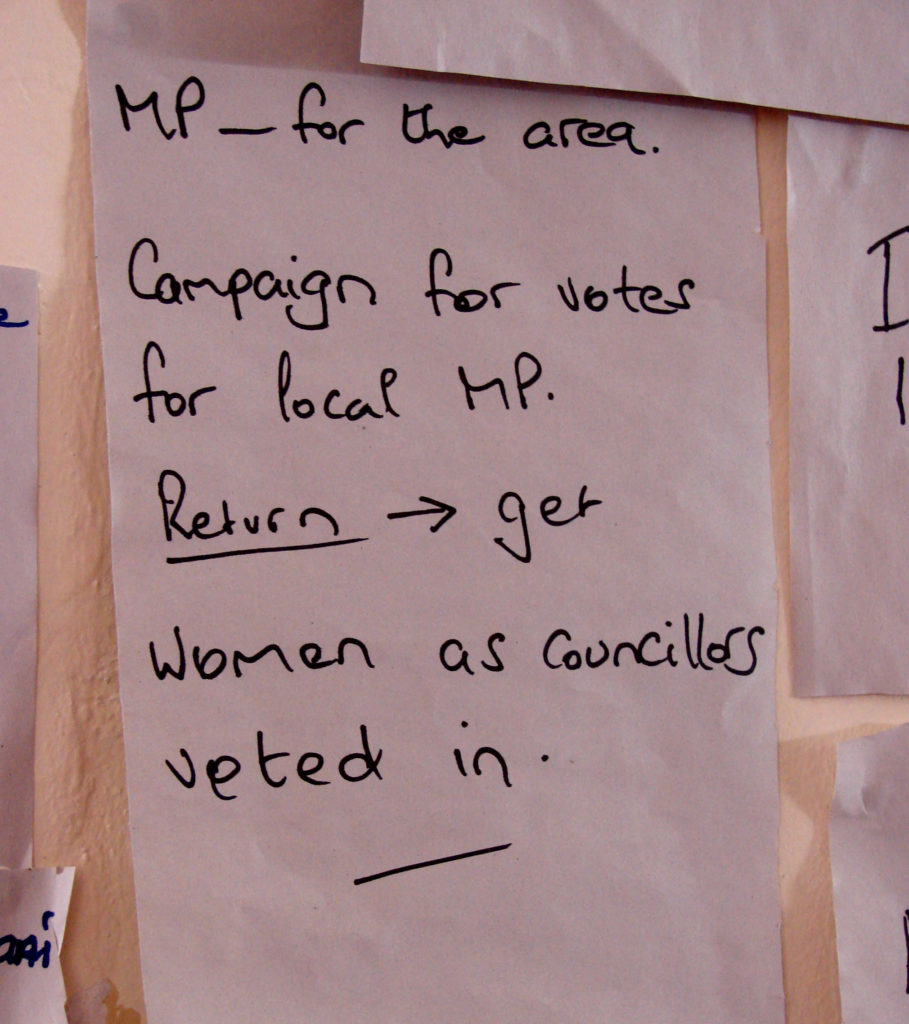 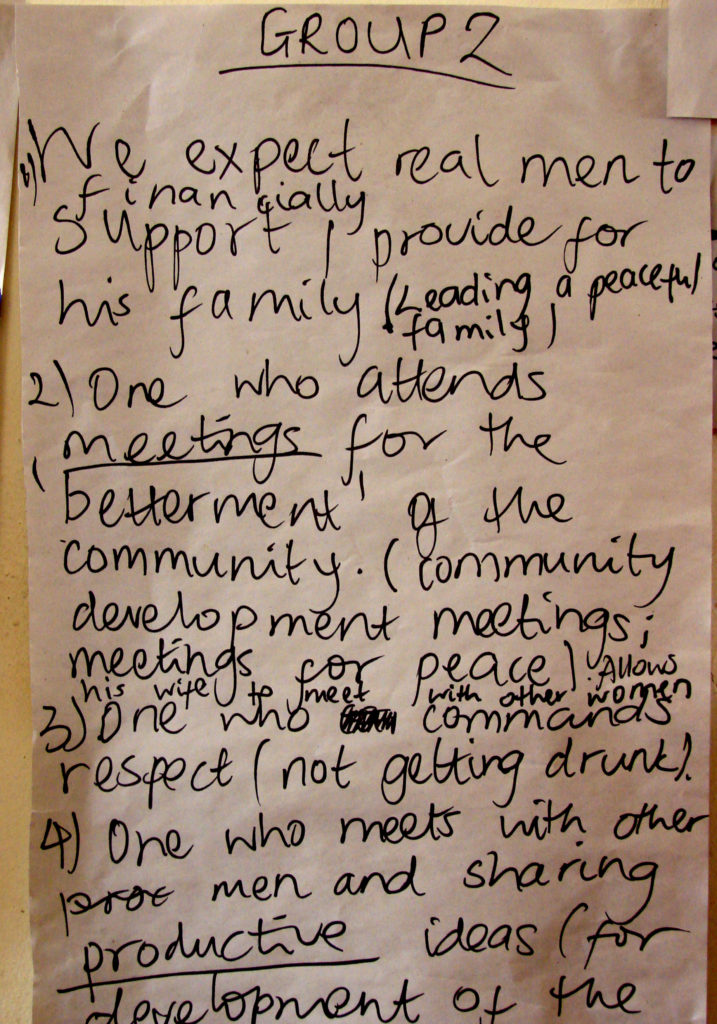 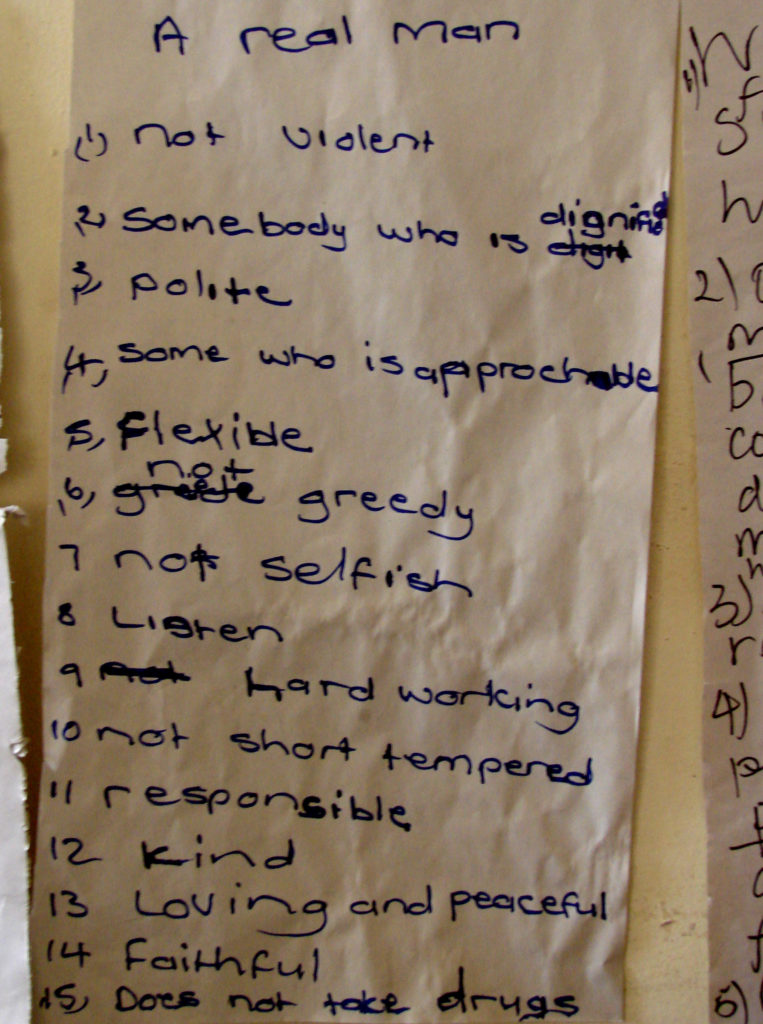 The group of women that visited the Harare Colloquium included women from a political and NGO background. They traveled from South Sudan, Uganda, Burundi, Zimbabwe, Liberia, the Philippines and the Netherlands. They visited the village Seke for a long and pleasant afternoon. The whole village was present.